Webinar special: Catch up on the first of our brand new B is for: Black series with Jess Creighton 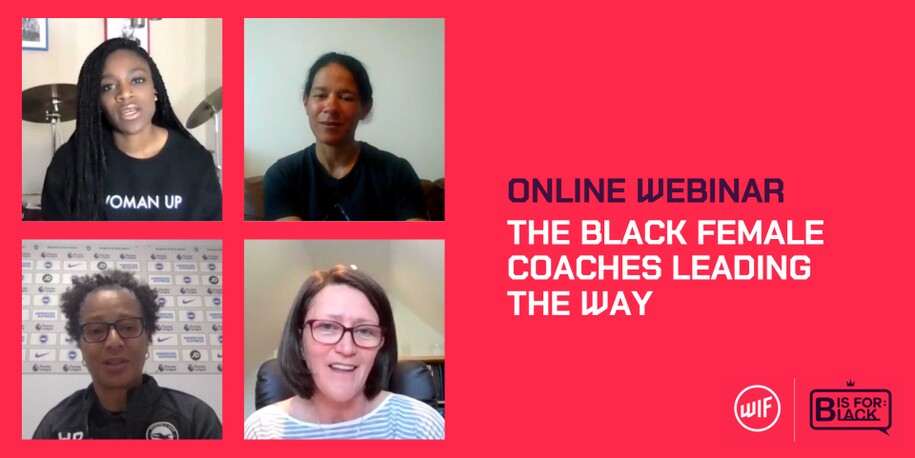 Women in Football members gathered on May 17 to enjoy the first webinar in a new collaboration with Jessica Creighton and her YouTube series, B is for: Black.

Jessica was joined by Brighton & Hove Albion Women FC’s Hope Powell CBE, Peckham Town FC's Mary Phillip and Audrey Cooper, Head of Women's Coach Development at the FA, for a brilliant discussion on their experiences in the industry and what we all need to be doing to challenge for change.

Click here to enjoy a playback of the webinar or alternatively take a look below at some of the key discussion points that were explored...

Jessica kicked off the conversation by asking Mary and Hope what barriers they’ve encountered during their careers. Both coaches spoke about the discrimination they’ve faced, but both were also resolute that they have not allowed such barriers to halt them on their career journeys. Hope believed most of the discrimination she experienced was due primarily to her gender, but also acknowledged the added impact of being a black female in the industry. Audrey added that understanding those barriers is the key to eradicating them, explaining that “The more we understand the barriers, the more we can break them down.”

As Jessica asked the panelists about their respective journeys into coaching, a passion that both felt began as players, the idea of ignorance was raised. Mary, as Manager of Peckham Town FC, said that the inclusive and diverse approach of the club has been very impressive, however at away matches, individuals often assume she is not the manager due to her gender, confronting her with the reality of “the ignorance of some people that they think women can’t understand football”.

Despite this, the message was a positive one, with Hope adding “Females are breaking barriers in the game. Mary’s an example of what can be achieved. We continue to break these barriers... it’s not about coaching the gender. It’s about coaching”.

Both Mary and Hope then expressed their excitement for next season, revealing how, as a manager, the work never stops. As soon as the last cup game is played, it’s on to the planning for the following season, with relentless off-pitch work needed to ensure the betterment of the team.

Following on from the exciting conversation about their respective teams’ future plans, Jessica then asked why there aren’t more black women working high up within the game. Hope explained that it’s part of a wider issue in which there are fewer black women players, and therefore fewer black players transitioning to the role of coach and manager.

Hope explained that the reality of fewer black women on the pitch is, in part, due to the changing standards and expectations within the game. With a focus on Centres of Excellence, the ability for low-income families who live in inner-city areas to access the game has been affected. Without the means to travel to a Centre of Excellence, a significant amount of talent, is being missed – with many talented black female players sadly included in this number.  Audrey echoed Hope’s sentiment and agreed that with the growth of the game there have been missed opportunities and that it’s time to get back into those communities.

Mary then highlighted the importance of having role models who are representative of the black community as that representation is hugely important in inspiring black women to get into the game.

So, in order to have those role models in place, how important is it for decision-makers to be diverse? There has been a lot of talk recently about the need to have diverse leadership teams, something which has proven challenging within football. As Hope mentioned, “people employ people like themselves” which is why “diversity of thinking is so important when you’re looking at recruitment”.

The panelists also discussed the importance of not just recruiting diverse talent, but retaining it. Cultivating a welcoming and inclusive culture, in which values are lived, is essential in embedding diversity within a football club.

The panelists also agreed on the importance of mentoring and gaining wisdom, guidance, and career advice from more experienced individuals, especially for career progression. Audrey specifically highlighted the FA’s work in offering mentorship programmes that engage with representative mentors with wide skillsets who can act as a sounding board. She added that “Everyone is trying to address the imbalance - if we put our collective effort together and give people mentors, we will start to see progress”. Please click here to find out more about the Women in Football Mentoring Programme.

However, Hope also conceded that often, it’s not what you know, but who you know, but in order to get people to advocate on your behalf, you have to start putting yourself out there, be that through meeting people who could help you in real life, to connecting with people on social media, what’s important is to network within the footballing community. Embrace opportunities and go for it!

What better way to end the first in our B is for: Black series!

A huge thank you to our fantastic host for this series, Jessica Creighton, and our incredible panelists, Hope Powell CBE, Mary Phillip and Audrey Cooper, for sharing their amazing insights and experiences with us, and a thank you to all our Women in Football members for tuning in and being part of such an important conversation. We look forward to seeing you all again at the second in our series on 8 June, click here for more information.

Females are breaking barriers in the game. Mary’s an example of what can be achieved. We continue to break these barriers...It’s not about coaching the gender. It’s about coaching."