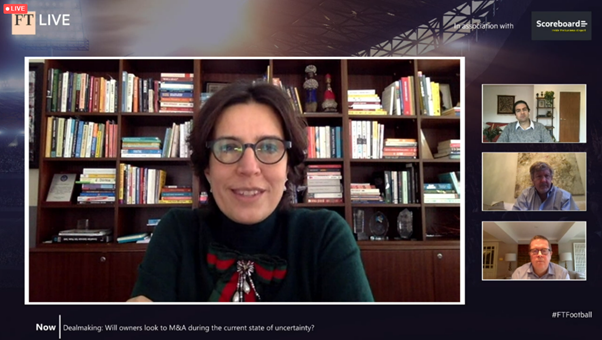 Women in Football had a strong presence at the recent FT Business of Football Summit, contributing to conversations over the two-day event ranging from media rights to racism and fans returning to watch live football.

As part of WIF's partnership with FT Business of Football Summit, our members were able to take advantage of discount rate to watch an international line-up of over 60 speakers at the expanded two-day programme.

WIF chair Ebru Koksal, along with board members Paul Barber, Kelly Simmons MBE and Lungi Macebo, ambassador Dame Heather Rabbatts and Baroness Sue Campbell, The FA's Head of Women's Football, were prominent speakers, while it was great to see our new branding feature heavily throughout.

The topic of discriminatory online abuse was, quite rightly, a key topic of discussion and WIF ambassador Dame Rabbatts put it quite succinctly, saying: "It's no longer acceptable to use the excuse of freedom of speech" when referring to the abhorrent racial abuse that is so prevalent on social media platforms.

The impact of the pandemic, both to those who play football or go to watch as a spectator, featured heavily throughout the event and some fear that the game’s survival is at risk without adequate investment and support.

WIF board member Baroness Sue Campbell recognised the value of key partners such as Barclays,  "...because they genuinely want to be part of a bigger purpose".

Kelly Simmons MBE, Women’s Professional Game Director at The FA, also spoke about what is needed to ensure that the women’s game thrives moving forward and you can hear what she has to say in the video below.

The loss of spectators has not only been felt financially by clubs throughout the football pyramid, but by the players and fans themselves, who are desperate to get back watching their favourite players live, and not on TV.

WIF board member Paul Barber, Deputy Chair and Chief Executive of Brighton & Hove Albion, understands this all too well.

Speaking at the summit he said: “We are hopeful that we might see a small number of fans back by the end of the season, but realistically we are preparing for the worst and them not coming back.

"There is a huge demand for people to get out of their homes and see live events, and in particular live sport. The opportunity for them to come back and watch a game in a stadium is significant.

“For us, it can’t come soon enough but it has to be done when it is safe to do so.”

The impact of the pandemic, both to those who play football or go to watch as a spectator, featured heavily throughout the event and some fear that the game’s survival is at risk without adequate investment and support."

FIFPRO and Women in Football collaborate on "Ready to Board" programme