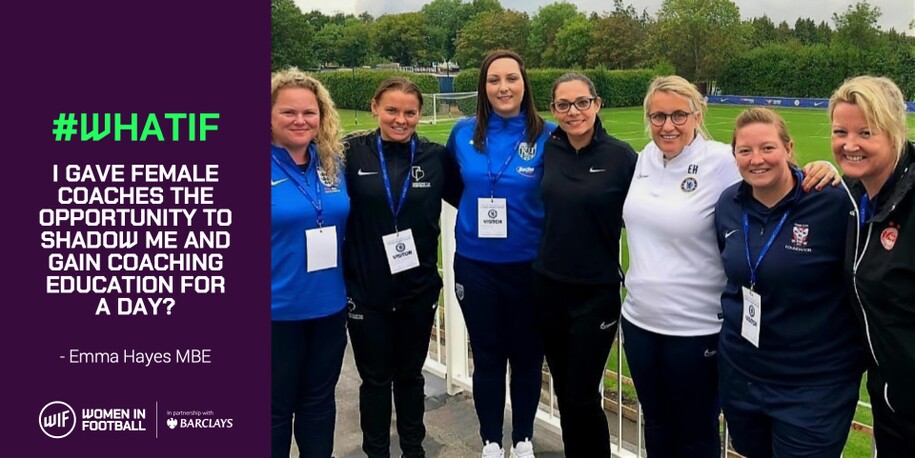 Women in Football's ground-breaking #WhatIf campaign launched in May 2018 aiming to change the football landscape by helping create new opportunities for girls and women.

In the next of a special mini-series we take a look at one of the key pledges made since the official launch at Twitter's London HQ and find out what has happened since.

Within minutes of Emma Hayes MBE sharing her pledge on Twitter, Women in Football's email system went into meltdown.

Over 350 coaches from across the globe applied for the opportunity to spend a day shadowing the Chelsea manager at the club's Cobham training ground.

The response was truly phenomenal, but following a stringent selection process involving Hayes herself, those numbers were whittled down to just half-a-dozen.

Emma Hunter, manager of Aberdeen WFC, was one of the group selected and the experience is one that has influenced her own coaching style for the Premier Division side since.

"It inspired me so much," says Emma. "Emma Hayes opened up and shared so much it was an invaluable experience.

"Off the back of her talking about challenging and not being scared to go for what you strive for, I went back to my club Aberdeen and implemented a lot into our own philosophy as a team.

"There is an overall club philosophy in place, but I felt so inspired I wanted to develop this more specifically  for the women's side. I reached out to Women in Football chair Ebru Köksal, and we spent around an hour and a half talking things through, before I sat down and talked about all thing women’s football.

"We have introduced this to the team and have spent some time on it both classroom based work and on the pitch, it is something that I don't think I would have done if it hadn't been for the day spent with Emma Hayes. I feel it has really made a difference to our squad and is showing with our very successful start to our season being top of the league currently"

“I personally was very interested in the work they have done around the menstrual cycle and since then have attended a few workshops in order to learn more and put into practise at our own club. I feel this is definitely an area as female elite athletes we need to consider and focus more on.”

Along with seeing first-hand the Chelsea manager's personal brand of people management, and learning how she motivates and takes care of her players, Emma Hunter and the other coaches observed a first-team recovery session and watched a Regional Talent Club (RTC) coaching session.

While the attendees absorbed every piece of information they could, the Chelsea manager was genuinely delighted to be able to host the day, and not surprised at the interest it generated from aspiring coaches.

"I'm not surprised that there was such a high interest in the pledge - women can now see there's a profession to go into with coaching," she said.

"I'm probably, how shall I put it, a little left of centre in how I approach things. I think that women who are not shoe-horned into coaching a certain way, those who may not have played the game, can relate to my journey.

"It's a tough profession, but can be a great one too and I was really happy to be able to meet the women and talk to them.

"I've always had an open door policy. I've never been opposed to showing people how to do the job of coaching in a first-hand way. You can only do so much sitting in a lecture or online, actually getting out there and putting stuff into practice in a real environment is something you just can't teach properly. You can try, but it simply isn't the same.

"When I was starting out as an aspiring coach I always wanted to have the "a day in the life of a coach" type of experience. I always felt that I never got that type of support in this country, but always from abroad," added Emma, who spent four years as head coach and director of football operations with US side Chicago Red Stars.

"I vowed then that when I came back, which I did i 2012, I would do my best to try and offer the support that I felt was missing.

"What was so great about the whole of #WhatIf is that it was an honest day, very candid, with nothing off the table in conversations. I know that it was very helpful to me in my career and felt that if I could, and can, help in any way, I will."

That experience sharing proved invaluable for the coaches, each of whom is at different stages of their own career pathway.

"I think we were all taken aback with just how much Emma was willing to share with us and how much we got involved," added Emma Hunter.

"I wished it had been for longer as the day went so quickly, but I took a lot from it and have implemented one particular saying about having the right mindset and a few other practices into my own training sessions already."

For Emma Hayes, the opportunity to offer a helping hand to her fellow female coaches was something she thoroughly enjoyed - and her support won't stop there.

"I still keep in touch and every now and then see what they are doing on social media; I'm keen to follow their journey and progression," she adds.

"The day wasn't all one way either as we shared a lot about what it takes to be a coach in a very direct way. They all had their own story and it's so important to give people the time, space and support to say what they want to.

"I think that I enjoyed it as much as they did, if not more!"

Off the back of her talking about challenging and not being scared to go for what you strive for, I went back to my club Aberdeen and implemented a lot into our own philosophy as a team."

FIFPRO and Women in Football collaborate on "Ready to Board" programme