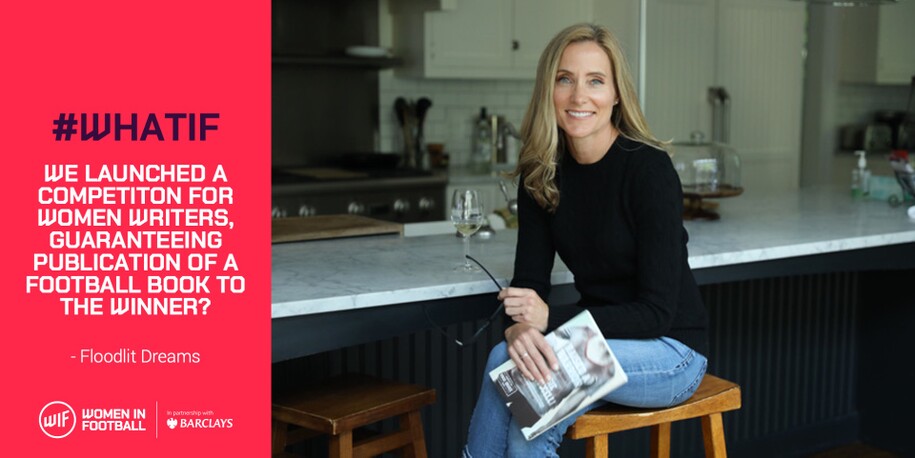 Women in Football's ground-breaking #WhatIf campaign launched in May 2018 aiming to change the football landscape by helping create new opportunities for girls and women.

In the next of a special mini-series we take a look at one of the key pledges made since the official launch at Twitter's London HQ and find out what has happened since.

The well-known saying "All good things come to those who wait" could have been written just for Susie Petruccelli.

Several years of writing and researching and a lifetime's ambition finally came to fruition with the publication of her debut memoir 'Raised A Warrior' on 8 May 2020 after she was named the inaugural winner of the Vikki Orvice Book Prize.

Speaking from her home in New York, Susie picks up her story: "It was an incredible journey to get 'Raised A Warrior' published. And it wouldn’t have happened without the #WhatIf campaign.

"I had been working on a book for a very long time. Really going back, the book stemmed from journals I had written on and off my whole life about all sorts of things – soccer, about my brother, sister, dad, mum, my hopes and dreams, insecurities, regrets. Things I needed to reconcile. I was always journaling.

"Then when I went through Harvard I realised that there were stories to be told; there were these incredible women whom I felt would be so inspiring for younger girls to know about like they were inspiring me. Girls that were not just inspiring because they were successful getting through high school and getting in to Harvard, but they were excelling at more than that.

"I had one thing, a sport, soccer, that I was pretty decent at and worked hard at, and luckily for me I’d basically been forced to keep up with my identical twin sister in school.

"But my team-mates at Harvard were playing a second or even a third sport at that level, ice hockey, lacrosse, they were singing in acapella groups, they were proudly getting A's at Harvard and they were witty and silly at the same time. They were amazing, inspiring young women. It made me imagine what their childhoods must have been like. The opportunities and support they must have had.

"I started to try to think bigger, I started to expect more of myself and I thought the stories were those other girls needed to hear so that they could expect more too and feel that it was possible.

"I ended up struggling at Harvard, I got injured. Having grown up in Southern California I found the east coast difficult with the weather, culturally, so as I tried to believe in myself and achieve, I was losing my footing. It was also important to me to include the things about growing up a girl that are easier not to talk about. It’s about more opportunities and less shame.

“I found out that before Title IX – enacted just two years before I was born – it was still legal to deny a woman a place at an academic institution just because she was a woman. That was shocking. I couldn’t believe it.

"I started reading about the history, about how women were denied opportunities throughout history, who the men and women were who stood up to write and pass the law and how hard people are still working – people like Billie Jean King and her Women’s Sports Foundation – to protect the law from being overturned.

"Then I realised if this is what has happened to women in the United States, what about those elsewhere outside of the US? My heart ached thinking of girls around the world being denied the joys – the whole experience - of the game. Were there any equivalents to Title IX? Were they also at risk of being overturned? I kept trying to add information, to find out more.

"At that point I started to see that the book I was trying to write was not only a story about an interesting and fun group of young women, but if I told it properly, a great sports story. It was about the ongoing effort toward gender equality. But I didn't know how to combine it, shape it.

"Luckily for me, I was following Women in Football on Twitter and also, independently, following journalist Ian Ridley because while I was writing, I was always trying to learn what good sports writing looked like.

"So, when I heard about the #WhatIf pledge and the opportunity for one person to work with Ian and Floodlit Dreams and to get their book published, I took a chance and reached out.

"It was an incredible experience, from the beginning submitting my entry to when I was short-listed. Getting shortlisted was a win to me! It was incredible reassurance that I was on to something.

"At the event itself, it was such a thrill and honour to meet people from Women in Football, and Ian, of course. These were the people I was hoping to find and recognise – the very heroes of my story – people who are growing opportunities for girls and women!

"Then when it came to announcing who was the winner of the Vikki Orvice Book Prize they mentioned those short-listed, then started describing the book that was the winner. I looked at my brother who made the trip with me and he looked back, "Oh my god! That's us!"

And so began the next chapter in Susie's story - from competition winner to getting her debut memoir published.

"One of the first titles I was using was "Title IX and Tampons" because those two things are symbolic of all the things that help women succeed on the field and in life," said Susie, "But it was too American specific, so "Raised A Warrior", which was another working title I had used, became first choice. That was great because it has meaning, double meaning actually, that’s revealed like book ends of the story.

"Over the next few months, they [Floodlit Dreams] designed a beautiful cover and translated the book into British English; the terminology was different with words like soccer changing to football, that kind of thing.

"I did ask if they were going to produce two versions, one for the UK and one for the US, but as it was fundamentally a UK audience first off, reading my story in British English it was to be. This was an unexpected upgrade and always makes me smile - it suddenly sounded so much more sophisticated!

"The team at Floodlit Dreams were incredible from start to finish - they put it all together and involved me in every step of the process. There was a very clear vision of what was right for the British market and I trusted them totally.

"We were coming up to the release date right when things started to close down because of the pandemic, a lot of publishers were pushing back release dates to the fall but Ian and Seth [Burkett] at Floodlit Dreams decided to rearrange the schedule and put out the e-book first.

"The book was the No. 1 release on Kindle the next morning and was then officially released on 8 May."

It was some weeks before Susie was able to get her hands on an actual physical copy of her first-ever book.

"It took weeks, I had to be patient," she said. "The books were printed, but the shutdown happened and obviously books were lower priority than medical necessities.

"When the first box of 10 books eventually came, it was a wonderful feeling, very emotional. The box getting out of quarantine and crossing the ocean to my doorstep was extra emotional because it felt like it might also be a positive sign about the pandemic."

Not only does 'Raised A Warrior' now take pride of place on her bookshelf, Susie will soon be able to add a second edition when her book is published in the United States.

"We signed an agreement with an American publisher two months ago, so they are translating it back! There goes my sophistication." she added, laughing. "Words like shin pads will be shin guards again. It will be a hardback version with a different cover and subtitle. It’s exciting. I’m so incredibly grateful for all of this."

As for Ian Ridley, journalist and founder of the book's original publishers, Floodlit Dreams, seeing Susie's book win the Vikki Orvice Book Prize, and playing a part in its journey from transcript to publication, was very special too.

"As a founder and board member, WiF was a huge part of who my late wife Vikki Orvice was," said Ian.

"When she died, it was only natural I picked up the baton and got involved in the #WhatIf campaign that she helped start up. Thus, the book competition and prize in her name was a pleasure of a pledge for my publishing company Floodlit Dreams to make.

"We're now really excited to be following it up with an anthology of women's football writing in 2021. What an amazing initiative #WhatIf has been."

And for those having second thoughts about trying to pursue a career as a writer, the final word belongs to Susie, who is living proof that it may take years, but dreams really can come true.

"An actress friend told me once you're going to hear 100 "No's" before you hear one "Yes". Whatever dream or project you have, if you believe in it, don't let anybody shake you off. Listen to constructive criticism, be open to ideas, and be willing to adapt. But don't give up."

You can buy "Raised A Warrior" here.

It was an incredible experience, from the beginning submitting my entry to when I was short-listed. Getting shortlisted was a win to me! It was incredible reassurance that I was on to something."

Euro 2020: At The Tournament with Reshmin Chowdhury