Karen Carney: Change is happening, but we must work together and keep pushing forward 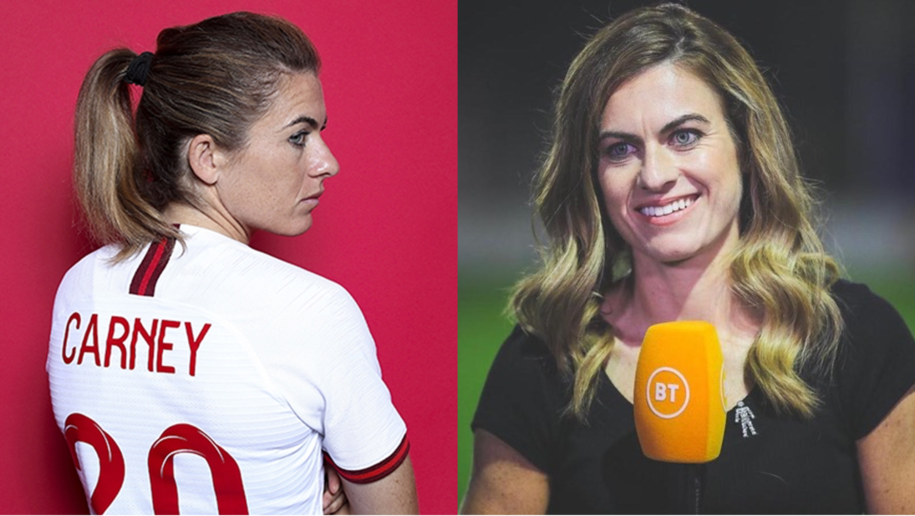 Karen Carney MBE in her playing days, left, and now enjoying a new role in broadcasting

When it comes to understanding the value of teamwork, you need look no further than one of England's all-time greats, Karen Carney MBE.

With a glittering playing career spanning two decades, in addition to her 144 caps and 32 goals for the Lionesses, Karen's many honours include a Super League and FA Cup double with Chelsea in 2017/18.

Her achievements stand unrivalled by many women and men in the modern game, so when Karen talks all things football-related, you listen.

Now working as a broadcaster with BT Sport and the BBC, she is well aware of the familiar challenges faced by women carving out a career in football and how important it is to work together to ensure the industry is diverse and inclusive.

"As a player I had a lot of it [gender discrimination] earlier in my career in terms of remarks made, but I do think that the emphasis has shifted now," says Karen. "We have had to put a lot of work in to make progress, but it does genuinely feel like there has been a positive change.

"Probably from when I was growing up until about three years ago, actually thinking about gender equality never really impacted on me; all I wanted to do was to play football. For me it wasn't about female and male, it was about playing the game. I loved football and I never really understood why people made such a fuss out of it.

"When I was playing there were a lot of men who said some pretty negative things which I just didn't get. I thought, 'Surely you've got a mother, a sister, a daughter, a niece, a girlfriend... a female role model in your life?' Someone who they would have thought twice about making the same comments to.

"But then the work so many people have put in through football, by players speaking out and refusing to be put off by comments, by challenging and working together, it feels like we have really turned a corner in the last three years.

Such is the positive nature of that shift that some of those who used to make detrimental comments based on her gender, have now reached out to apologise.

"It sounds strange, but it's true and a good thing," says Karen. "I don't know if it's because they have a daughter now who is playing football, a son who has watched women playing and are growing up seeing it as normal, or if it's because the players have a higher profile. It is changing, we've still got a way to go still but there is a definite shift."

Karen hung up her boots in July 2019 and says that having the support of her new colleagues in broadcasting is just as important to her now as it was when she was playing.

"When I first came out of retirement and started punditry at times it felt as if the clock turned back 10 years because of some online comments," she explains. "But why can't I say what I feel just because of my gender? It doesn't make me less able to read the game because I'm female!

"It's good that male pundits support you, speak out about you in the media and I'm lucky to work for people who back me and have belief in what I can do.

"At both the BBC and BT Sport the majority of the team I work with are men and they have been hugely supportive. They know I have the knowledge and that I'm not the finished article yet. But they are working with me and have given me the opportunity to learn and be the best broadcaster that I can be.

And for women working in the industry who may not have that same level of support or are being discriminated against, Karen has a simple message.

"It's important that you do share what you are feeling with someone," she says.

"We ask kids to speak out about bullying and gender discrimination is a form of that. It makes no difference just because you're an adult. It's not acceptable. People should have the confidence to speak out, but I do know it's not always that easy.

"It is difficult and I can see where the challenges and barriers lie so we should all work as a team and do our best to create comfortable environments where we can support each other.

"With anything in life, it is better working as a team rather than on your own. Working collaboratively as women and men in the industry is the best possible way forward."

"We ask kids to speak out about bullying and gender discrimination is a form of that. It makes no difference just because you're an adult. It's not acceptable. People should have the confidence to speak out, but I do know it's not always that easy."