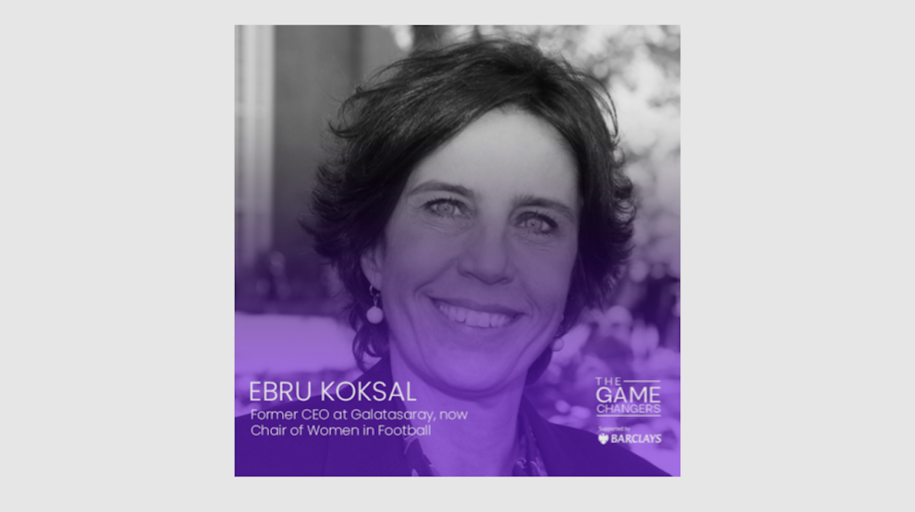 Women in Football chair Ebru Köksal was the special guest on The Game Changers this week, a podcast which features trailblazing women in sport.

A former financial analyst at Morgan Stanley, Ebru's career path took her to the role as CEO at Galatasaray. She was the first woman to be elected to the Executive Board of the European Club Association and became the first, and only, female General Secretary of the Turkish Football Federation.

Guests on The Game Changers: Fearless women in football, hosted by Sue Anstiss MBE and supported by Barclays, include high profile elite athletes and women in some of the most influential roles in global sport.

Ebru's credentials certainly put her in that category but, as she explains, it has been far from plain sailing.

Diagnosed with scoliosis, a sideways curvature of the spine, at the age of just eight, Ebru explains how this impacted on her life growing up, and also shaped her determination to succeed when the going got, and still gets, tough.

"[I have been] Circling back after about 45 years and questioning why I was so driven all the time and wanting to be successful and really having this high achievement personality," she says.

"It boiled down to those ages of seven and eight when I thought everything was perfect; I was the perfect girl of my parents and all of a sudden the doctors tell me that I am not perfect and that probably going forward I couldn't do sports, I couldn't have children in the future.

"All of that was very heartbreaking and I felt that my parents didn't love me any more, which was obviously not the case, but in my little seven or eight-year-old mind you make up these stories.

"I thought that maybe if I was successful in whatever I did, whether it was in sports or school or work afterwards, that people would love me. So, for a very long time, I mixed up love and acceptance with success.

"I only realised, probably as I turned 50, that I had this pressure always in the back of my mind. Unfortunately scoliosis is a physical disorder that limits many people's lives but I always fought against it. I have been extremely active and I think I am one of the few cases who has such an advanced level of scoliosis. Mine is past 90 degrees by now, but I still ski, I still play football every now and then.

"I decided back then when I was eight that I would fight against it all my life."

And fight it, showing great tenacity, determination and fortitude, she has.

To hear more of Ebru's incredible story you can listen to The Game Changers podcast in full here.

I thought that maybe if I was successful in whatever I did, whether it was in sports or school or work afterwards, that people would love me. So, for a very long time, I mixed up love and acceptance with success."